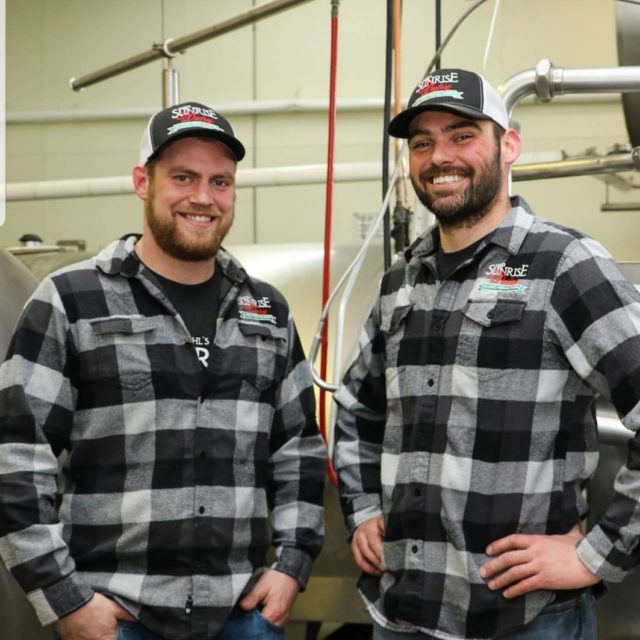 “You’ve forgotten!” was my introduction to Dahl’s Sunrise Dairy when I moved to the area a little over 5 years ago. I found the commercial charming and surprising, believing that home delivery of milk was a thing of the past, a bygone era. Obviously I was mistaken. Dahl’s Sunrise Dairy, owned and operated by A.J. and Nick Arntz, delivers to about 1000 homes weekly. That is in addition to the approximately 25 retailers and restaurants in the Northland that carry their milk, butter and cream. Their focus remains the same to this day, to offer an environmentally conscious and exceptional local product.

Dahl’s Sunrise Dairy began 20 years ago when Wayne Dahl purchased the delivery routes and processing equipment of three smaller dairies, Sipola, Johnson and Aysta. In October 2014 Wayne sold the business to Greg Arntz and Chris Bialke. Greg very quickly realized there was far more work involved in running the business and brought in his two sons; A.J., who took over the sales and distribution side and Nick, who took over the day to day operations. With Wayne as a mentor and learning as they went, the brothers bought the dairy from their father and took over full time in 2015. I asked A.J. if he had wanted to be a milkman growing up, he laughed and said no, but that he quickly became obsessed with the business. According to A.J. he and his brother had always been fairly entrepreneurial; A.J. beginning in high school making and selling t-shirts, and Nick had been the Owner/Operator of The Happy Wanderer, a local food truck. Aside from A.J. and Nick, their staff also includes two delivery drivers (A.J. being the third driver), a production staff of three and one person in their office.

Anyone who’s had Dahl’s Sunrise Dairy products knows it is delicious. Their process is the same as any other dairy production, but what sets Dahl’s apart is their attention to detail, beginning with the cows. Dahl’s gets its milk from five area family-run dairy farms all located in the Iron Range. These families pasture raise their cows, which results in milk richer in Omega-3 fats, Vitamin E, beta-carotene, and CLA (Conjugated linoleic acid, a beneficial fatty acid). Each of the farms employs a nutritionist to ensure the cows produce the highest quality of milk. They also ensure the cows are treated humanely and are not injected with artificial growth hormones.

The cows are milked twice daily and the milk is stored until it can be picked up for delivery to the Dahl’s processing plant in Babbitt, MN via the Burnett Dairy Cooperative dairy truck on Sunday evenings. On Monday mornings the milk gets bottled. The first step is separation of the heavy cream and skim (non-fat) milk. Once that is done Nick and the other processors work in batches, adding a certain amount of cream back into the skim milk to take it back up to 1% (low fat) milk, 2% (reduced fat) milk and whole milk. After this the milk is pasteurized at 170 degrees and then it is homogenized, a fancy term meaning the milk is pressurized so the cream will not separate again from the milk. At that point the milk goes into the filling machine and then into the reusable glass bottles. Some of the cream is bottled, and the remaining cream not bottled is churned into butter. After that the milk goes out for delivery.

Another aspect that sets Dahl’s Sunrise Dairy apart is their focus on sustainability and the effort they put into being environmentally conscious, hence the reusable glass bottles. A.J. acknowledges that the returnable bottles can be a pain, but they are instrumental in cutting back on waste. The glass bottles can be reused as often as they are returned, saving more than 300,000 bottles from the landfills annually! A.J. asked me to convey how extremely appreciative they are of all of their customers for choosing their products!

Dahl’s Sunrise Dairy has a very strong bond with the community, especially within the sport of hockey. They sponsor a youth hockey team named “The UDDER Guys” and are the “Official Milk’ of the University of Minnesota – Duluth Bulldog Hockey team. They strive to produce the best local product for their communities and are looking forward to continuing that commitment. I asked A.J. what might we see in the future, he answered, “Chocolate Milk!” As with all of their other products, I’m sure it will be “Dahlicious”!